It’s time to give you a quick update on the garden!  We’ve been enjoying the bounty this year, that’s for sure.  The above photo shows some vigorously blooming oregano!  In general, my flowers are a little more sparse than usual right now.  I’ll have to work on that and figure out some “late bloomers” that I can plant next year!

At the moment, I have a jungle-like flowerbed just outside one kitchen window. 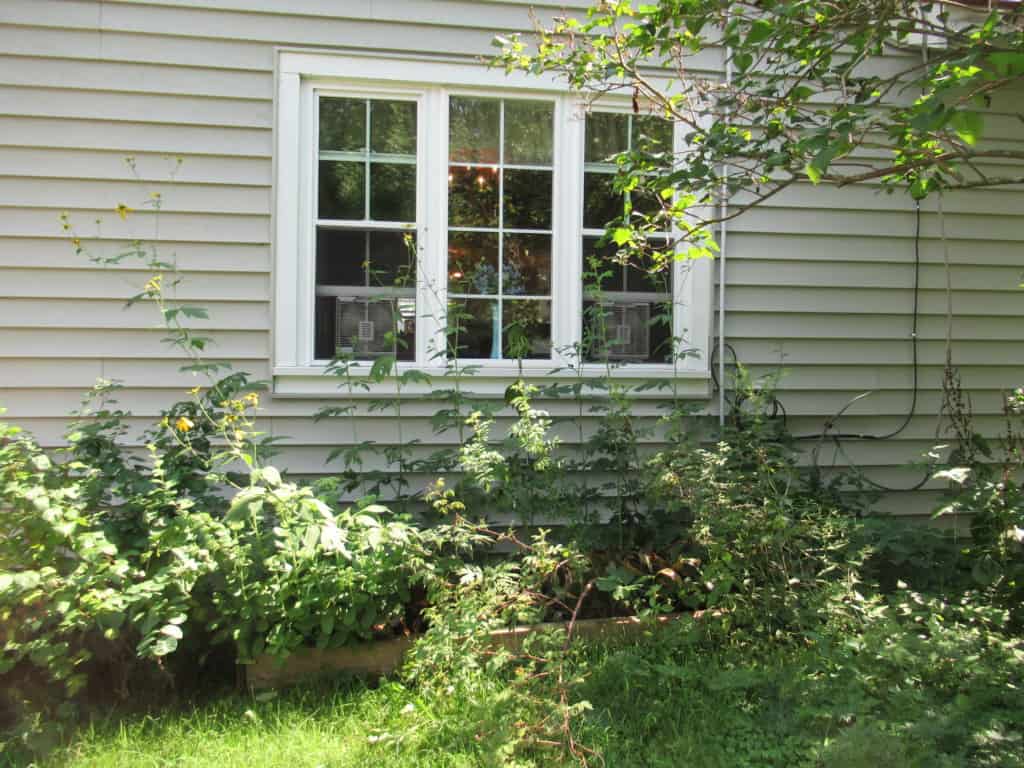 The tall plants in that bed are called, “Outhouse Plant.”  I got starts for this a few years ago when I worked as a gardener for a nature preserve.  It is so-named because it grows rather tall, and in the “old days,” it was planted around the outhouse perimeter to “camouflage” it.  I love the beautiful yellow flower.  It spreads quite easily on its own, and it is perennial.  It can become invasive, so I thin it every year.  Here is a closer look. 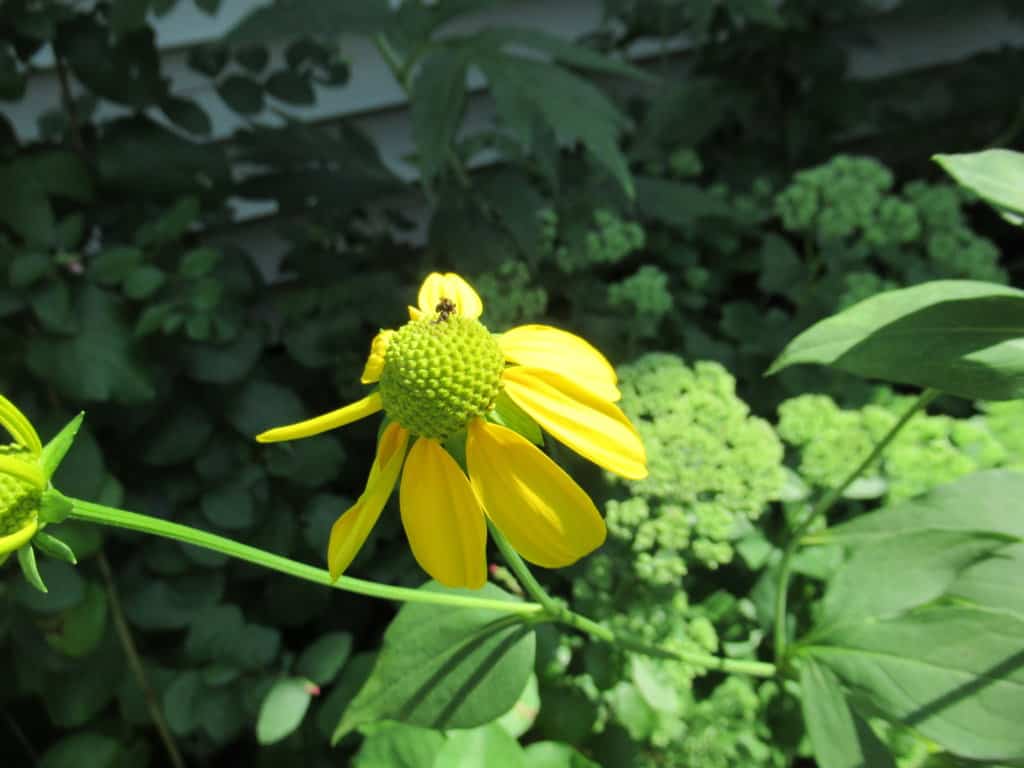 When my mother was alive, she told me that when she was a little girl, her family used to plant Hollyhocks around their outhouse to hide it a bit.  Yes, I’m old enough to have a mother who was old enough to have used an outhouse!

It appears that something has been munching on this plant!  A closer look reveals the truth. 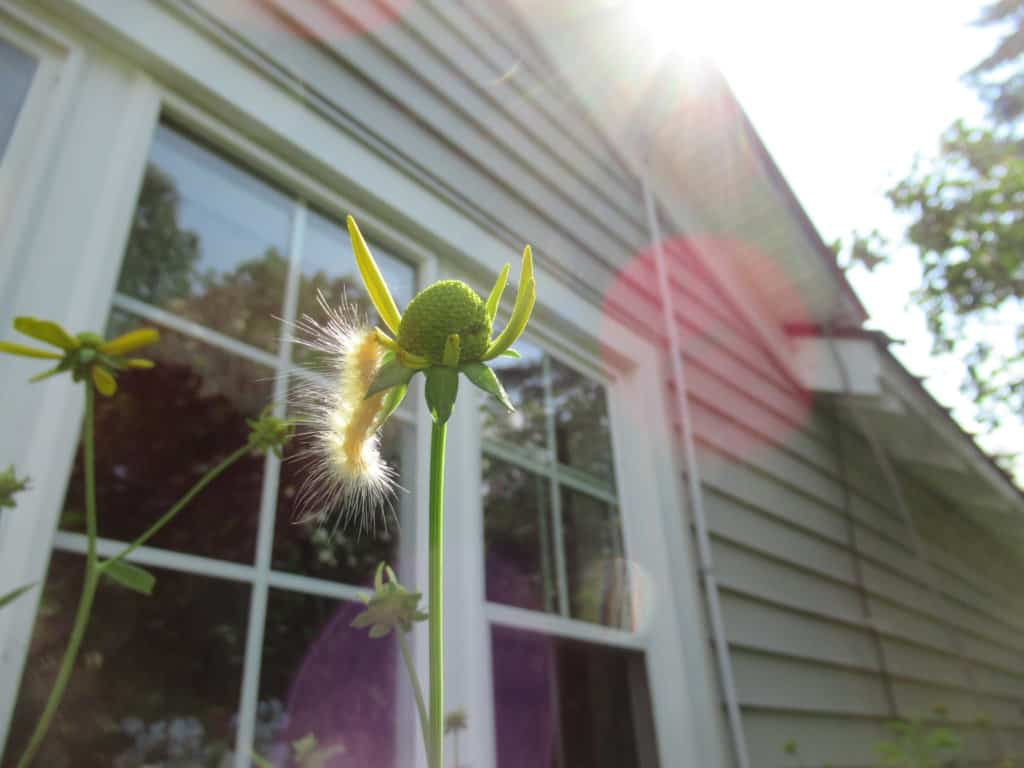 I’m not sure of the type of caterpillar, but it looks to me like some sort of Tussock-type.

Remember the Dr. Seuss apple tree?  Here is a picture from the later winter-early spring. 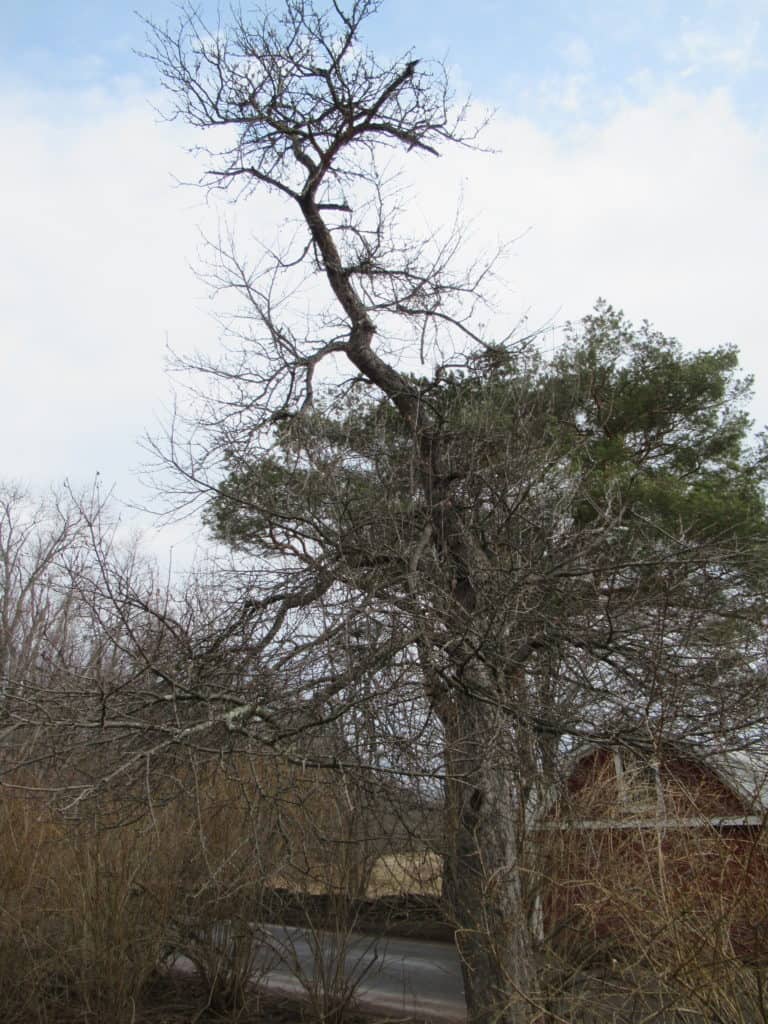 There is a Rose of Sharon in bloom underneath it!  It is a little sad, because it is getting crowded out by the Forsythia. 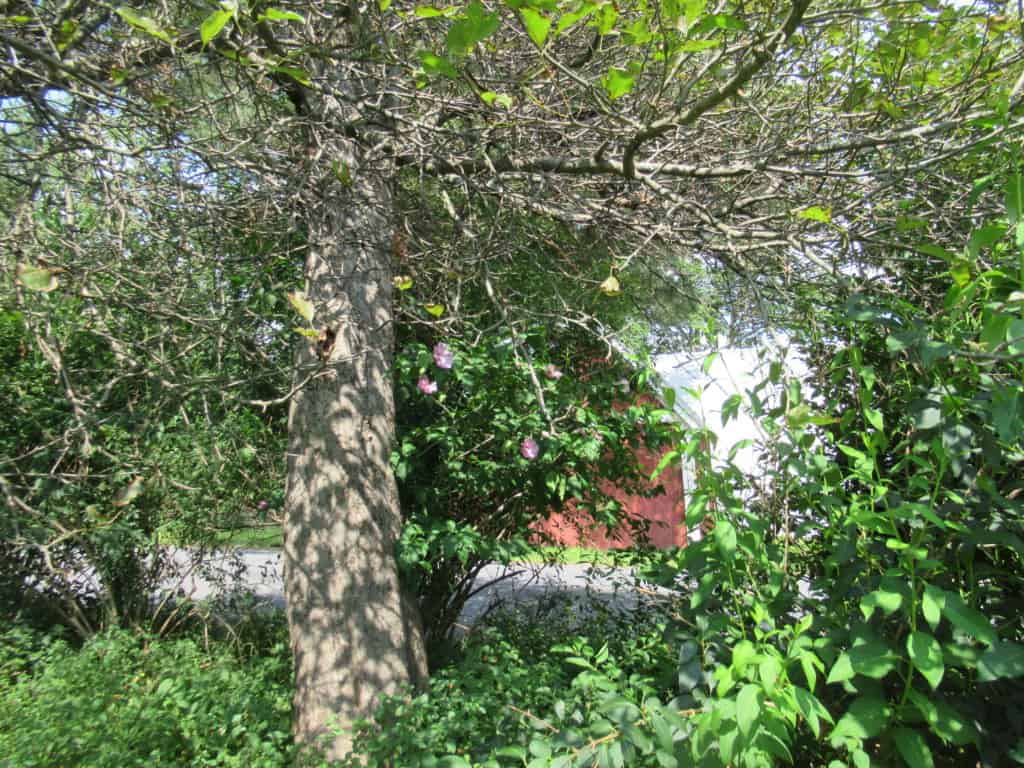 Tree and Rose of Sharon 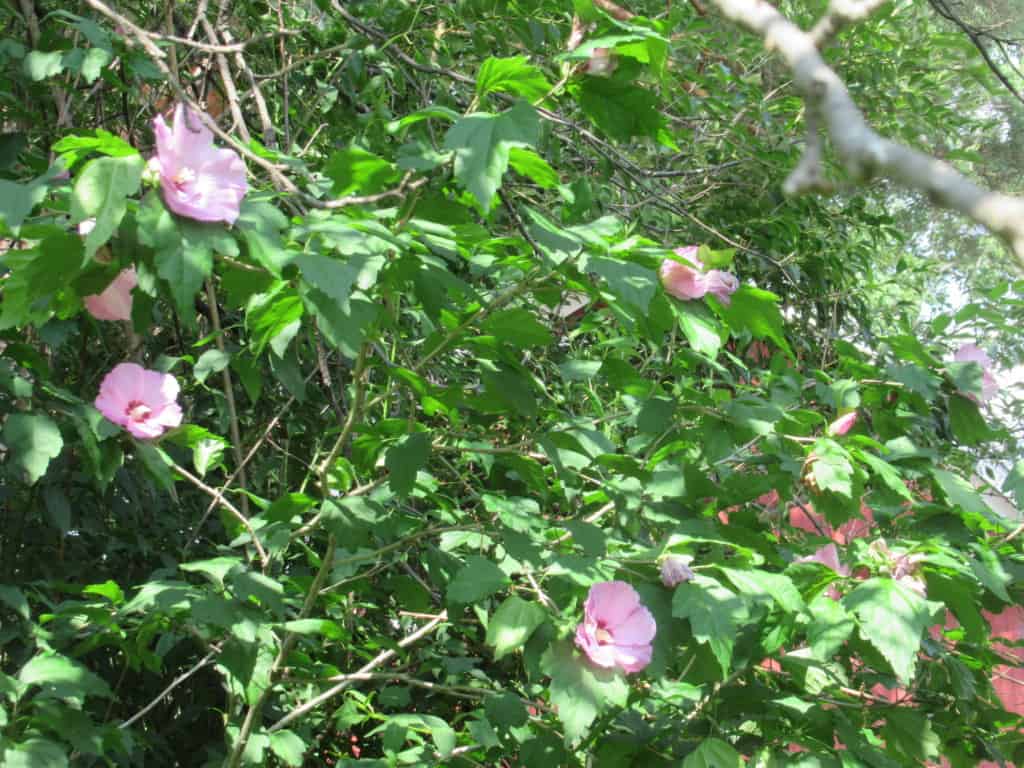 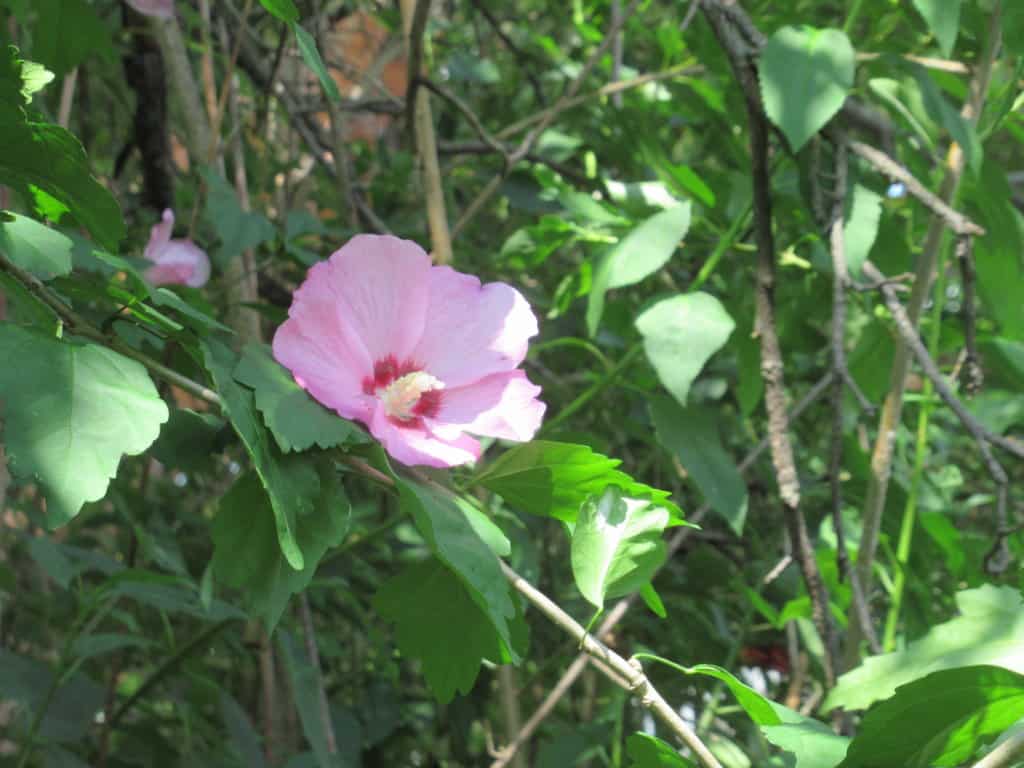 Did you ever notice how much the Rose of Sharon looks like a Hibiscus?  That’s because it is in the Hibiscus family!  These blossoms are so beautiful.

Of course my little “helper” had to come outside to enjoy the sunshine. 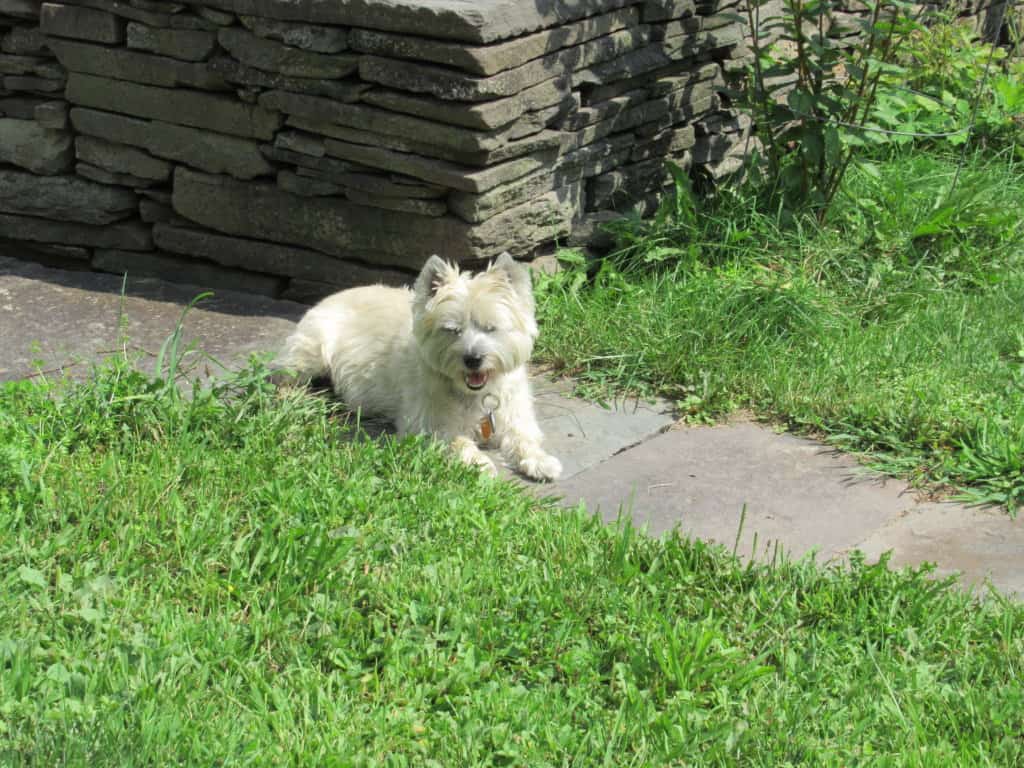 More yellow flowers are blooming on our Sunchokes, otherwise known as “Jerusalem Artichokes.”  They are really not artichokes.  They are a tuber that looks like a funky potato, or even some sort of creature.  They are also perennial, and actually in the Sunflower family.  The tuber is edible and is a form of starch that is diabetic-friendly. 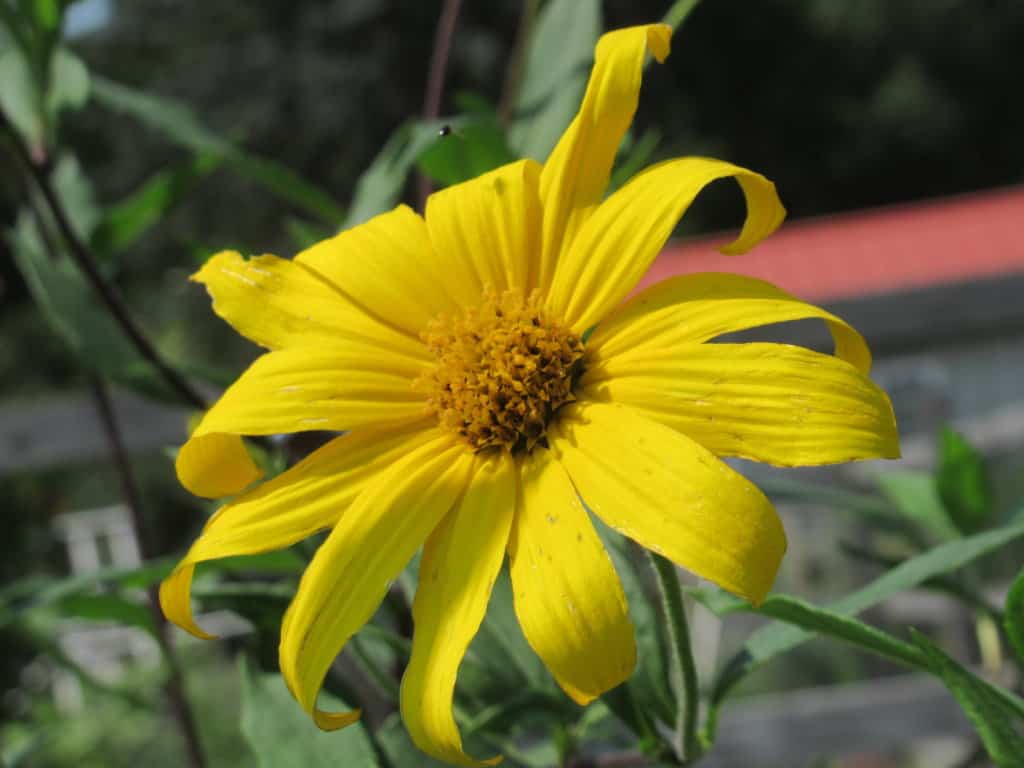 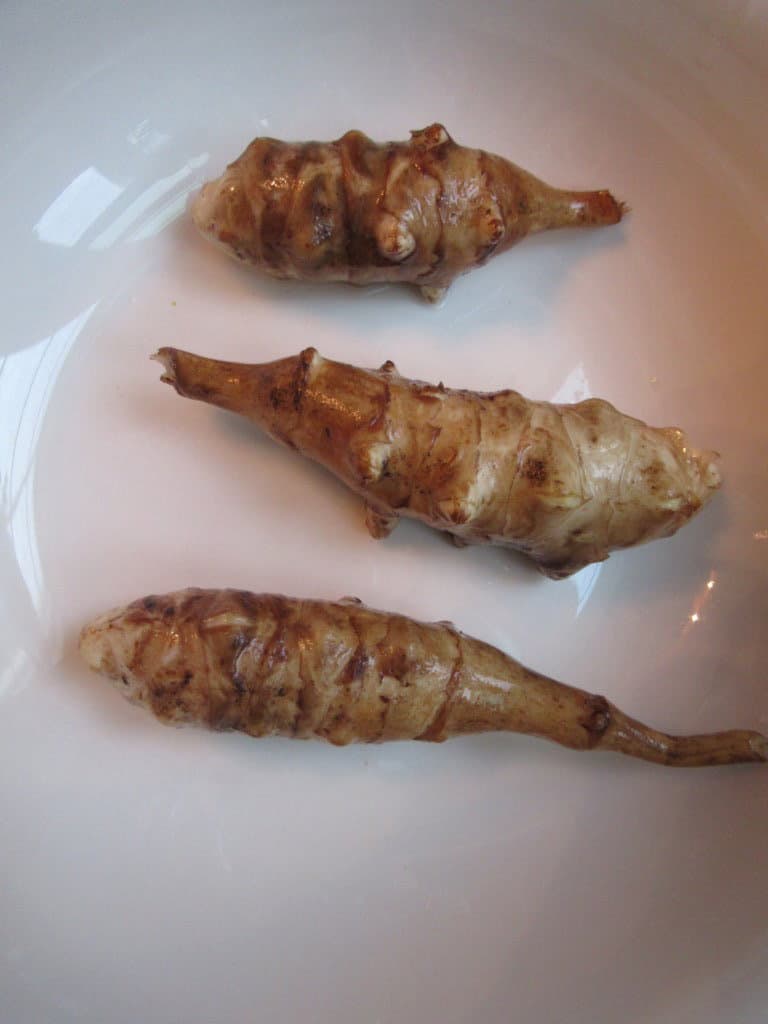 These plants grow very tall, up to around 10 feet, and they spread easily.  Some people regard them as invasive, so if you plant them, watch them carefully! 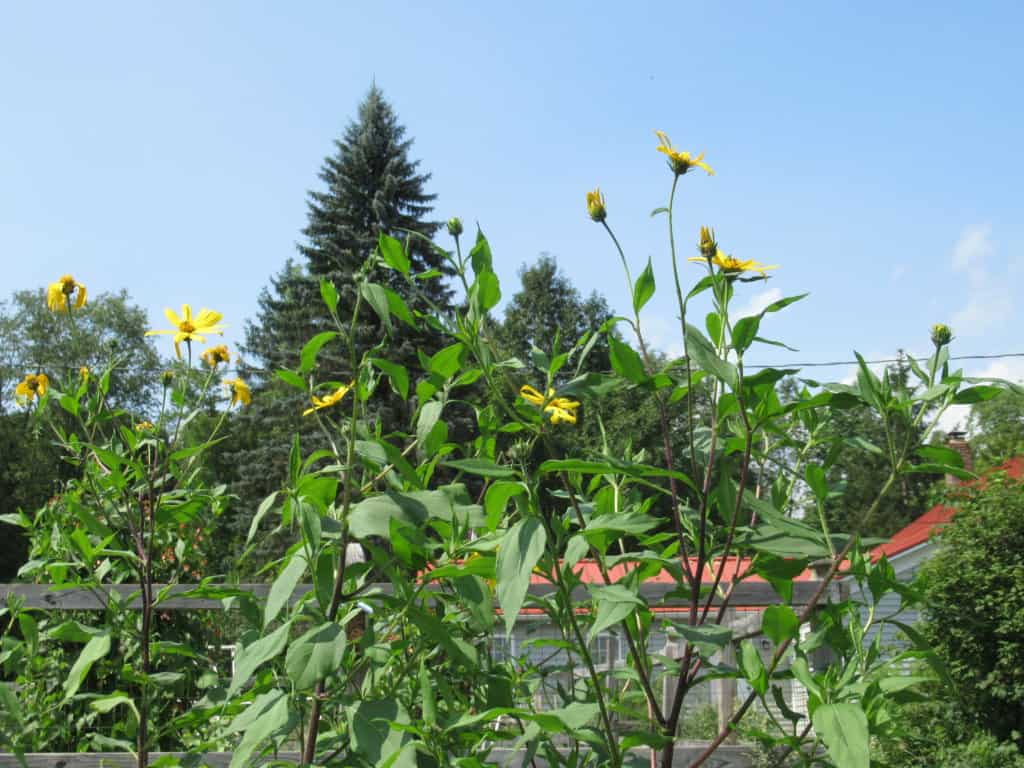 And for my final featured flower of the day, here is Tansy. 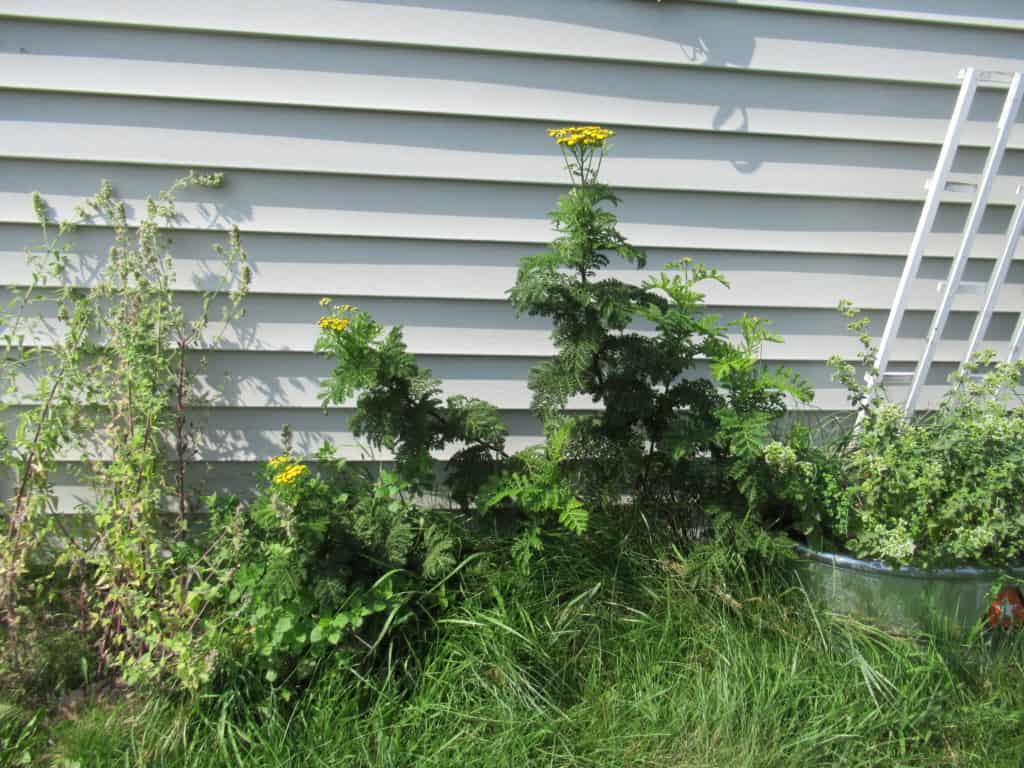 Some people regard Tansy as a weed, but I love it.  Tansy tends to resemble Yarrow, with little “buttons.”  It has been known to deter ants, so I plant it right under my kitchen sink window.  That seems to be the place most vulnerable to ant invasions. 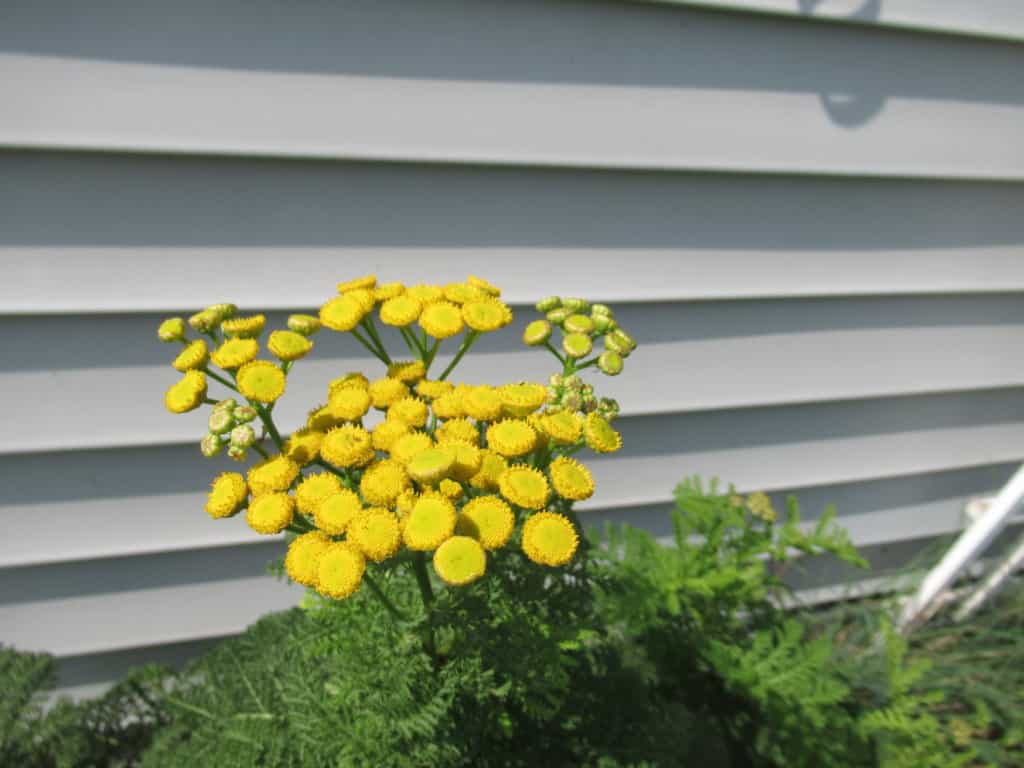 Tansy is a help in the compost pile, due to its high level of potassium.  It is not only a deterrent to ants, but also to flying insects, Japanese beetles, squash bugs, and cucumber beetles.

It is no coincidence that each of the plants featured in this post are perennial.  Perennials are the staple plants of the Permaculture world.   After the initial investment of time, energy, and resources, perennial plants are like gifts that just keep on giving!  It is wonderful to see the abundance naturally multiply.  In addition, perennial food, such as the Sunchokes, are a heavenly addition to all types of menus.

The idea is to lessen the labor intensiveness of the garden, and of our lives.  The more we can put into place right now to lessen our burden in the future, the more we can reap and enjoy the benefits.

That’s it for this week’s garden update!  Stay tuned for more goings-on at the Mountain Farmhouse!

What’s growing in your garden?

Blessings to you all!